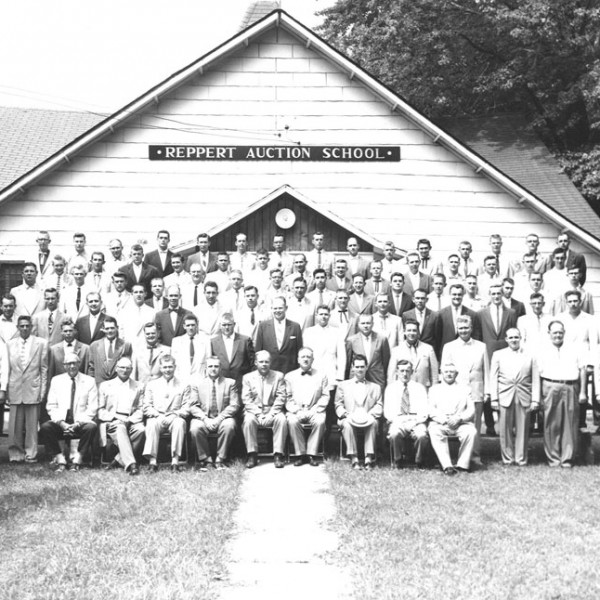 
In 2017, the school was purchased by John Kruse, who along with his father Dennis Kruse, and brother’s Matthew and Tim Kruse, moved the school back to Auburn, Indiana, where the auction business school currently operates.

The Repperts School of Auctioneering was founded in 1921 by Col. Fred Reppert of Decatur, Indiana. Fred Reppert started in the auction business as a young boy and quickly rose to the top of his profession, selling auctions in every state of America, and in every province of Canada and Mexico. He was widely recognized as the greatest auctioneer in the world, setting several world records in the sale of livestock, real estate and personal property.

The school’s tradition as an institution for auction education was carried on by Fred Reppert’s daughter Eleanor and later by his son Rolland Reppert, M.D., who both owned and operated the school, with the assistance of Quentin R. Chaffee, who served as the school’s dean of instruction. Phil Neuenschwander and Ron Chaffee then operated the school from 1980 until 1996, when it was purchased by Dennis Kruse of Auburn, Indiana. Dennis Kruse, a 1964 graduate of Repperts, a past president of the National Auctioneers Association, Indiana State Senator, and Trine University Board of Trustees member, now serves as president emeritus of the auction school. In May 2011, Reppert Auction School was purchased by Jack Christy and his daughter Melissa Davis of Christy’s of Indiana. John Kruse, Dennis’s son, purchased the school in September of 2017. He is now president of the school, and his brother Matthew Kruse is the Dean of Instruction. Ron Chaffee serves as the dean emeritus.

The school held three-week classes twice a year from 1921 to 1985, with all the classes being held in Decatur, Indiana, with the exception of one class given in Colorado. In 1985, the school format was changed to two weeks, and was offered three times a year. After the purchase by Dennis Kruse, the number of class terms was expanded to four a year, with additional classes being given for a short time in Scottsdale, Arizona, and Indianapolis, Indiana. The auction school currently offers a ten-day auction training class three times a year in their Indianapolis location.

The Reppert School of Auctioneering has had graduates from every state in the United States, as well as multiple foreign countries, and is the nation’s longest continually operated auction school.

Close Menu
We use cookies on our website to give you the most relevant experience by remembering your preferences and repeat visits. By clicking “Accept All”, you consent to the use of ALL the cookies. However, you may visit "Cookie Settings" to provide a controlled consent.
Cookie SettingsAccept All
Manage consent

This website uses cookies to improve your experience while you navigate through the website. Out of these, the cookies that are categorized as necessary are stored on your browser as they are essential for the working of basic functionalities of the website. We also use third-party cookies that help us analyze and understand how you use this website. These cookies will be stored in your browser only with your consent. You also have the option to opt-out of these cookies. But opting out of some of these cookies may affect your browsing experience.
Necessary Always Enabled
Necessary cookies are absolutely essential for the website to function properly. These cookies ensure basic functionalities and security features of the website, anonymously.
Functional
Functional cookies help to perform certain functionalities like sharing the content of the website on social media platforms, collect feedbacks, and other third-party features.
Performance
Performance cookies are used to understand and analyze the key performance indexes of the website which helps in delivering a better user experience for the visitors.
Analytics
Analytical cookies are used to understand how visitors interact with the website. These cookies help provide information on metrics the number of visitors, bounce rate, traffic source, etc.
Advertisement
Advertisement cookies are used to provide visitors with relevant ads and marketing campaigns. These cookies track visitors across websites and collect information to provide customized ads.
Others
Other uncategorized cookies are those that are being analyzed and have not been classified into a category as yet.
SAVE & ACCEPT